Interview with Andrea Ascari, the author of the Italian libretto of Ami e Tami published

Sharing the English translation of the interview with Andrea Ascarion the pages of Blog Della Musica by Silvia Spadon.

Andrea Ascari, the musician, librettist and actor, has translated into Italian Mátti Kovler's Ami and Tami, or Hansel and Gretel . We met and interviewed him on the occasion of the release of the Ami and Tami symphonic album, available as of several days ago on all major music streaming platforms.

Today we host Andrea Ascari on the pages of Blog della Musica. Hello and welcome: for those who still don't know you yet, can you tell our readers a bit about yourself?

Hello everyone and thanks for having me!

For 25 years I have dedicated myself to premiering unpublished musicals in Italy as a translator, adapter, teacher and vocal coach. I am especially fond of a genre of musical theater, that for a lack of a better word in Italian we call "cultured musical", a snobbish and horrendous term at best— that is used to distinguish more complicated and nuanced works such as West Side Story or Hamilton from products created for pure entertainment such as Grease or Mamma Mia!

Among the many musicals that I helped introduce on the professional stage in Italy are: Sweeney Todd , Il Bacio della Donna Ragno , Next To Normal and the classic Oklahoma! In the educational circuit: Into The Woods , How To Succeed in Business… and the crazy (but amazing!) Urinetown .

Andrea, you come from the world of classical music, that you have set aside to devote yourself entirely to the "cultured musical"?

That's right, I do have degrees in piano and musicology but while studying 20th century music I fell madly in love with the Broadway Musical. It was during the 80's when in Italy musical theater was not "in" at all, indeed, and I was mind blown by versatile actors of the Broadway stage: acting-singing-dancing. The so called "cultured musical" I was talking about is represented by my most favorite musical theater composer and writer: Stephen Sondheim. Sondheim was mentored by Oscar Hammerstein (co-author of Show Boat , Oklahoma ), made his debut at age 27 writing the lyrics for West Side Story for Bernstein, and worked as a lyricist and composer for 7 decades in all imaginable directions, creating wildly different musicals, from Company (now on Broadway), to Sweeney Todd and the Pulitzer Prize winning Sunday In The Park With George. He himself was mentor to authors as diverse as Jonathan Larson (Rent ) and Lin-Manuel Miranda ( Hamilton ): in this capacity he is well represented in the film Tick, Tick… ​​Boom! with Andrew Garfield now on Netflix.

I know that you have been teaching at the School of Musical Theater between Novara and Milan since its foundation, could you tell us about what exactly is being taught there?

At this stage, the School is housed in four unique and very different theaters: the traditional Tetro Coccia of Novara, the immense Arcimboldi of Milan, the Teatro Politeama Pratese of Prato and the Maggiore of Verbania, overlooking the lake. The fact of being inside fully active theaters is an incredible educational experience. The three-year course trains professional actors to be capable of expressing themselves in the different modalities of the Musical Theater . Despite its young age (it will only turn 10 next year) it is the first school of its kind in Italy to allow for a Level I Academic Diploma that is recognized at the state level and equivalent to the three-year degree at any other university and faculty. The subjects are organized into ten disciplinary sectors : acting disciplines, linguistic practices, physical and vocal disciplines, dramaturgy and screenwriting, music, historical methodology, design and stage realization, theatrical pedagogy, production and direction. That's three years of total commitment! (click here to find out more: www.scuolateatromusicale.it )

A scene from the musical “Ami e Tami” by Mátti Kovler

Among other activities, you took a major part in the creatinon of an Italian language version "Ami and Tami, or Hansel and Gretel" a children's opera by the American composer Mátti Kovler whose record has just been released. What is the piece about?

Ami e Tami is a beautiful example of the Musical Theater I was talking about before: straddling Opera and Musical, with a crazy symphonic orchestration and a very contemporary and on-point libretto by Matthew Cole Kelly, that is full of magical realism. You can find everything here: the Ravel from “L'Enfant et les Sortilèges” or the Debussy from “La boîte à joujoux” coupled together with Isotta's Canto d'Amore, mixed with tap dancing and Bossa Nova. Among these inspirations from the past, however, is a very personal and virtuosic melodic style that is quite challenging to sing!

How did you meet Mátti Kovler?

It was director Marco Iacomelli who got me involved: I only had a couple of weeks to submit a first adaptation of Ami & Tami that Mátti liked and from there a great harmony was born. First via Skype (Mátti lives in Brooklyn) then in my attic in Novara when Matti and I worked collaboratively. For me it was a dream: Mátti comes from the same cultural background as Berlin, Gershwin, Sondheim… and attends the BMI seminars portrayed in Tick, Tick… ​​Boom! (this is the second time that I have mentioned Lin-Manuel Miranda 's film : a subtle piece of advice not to miss it!).

Ami e Tami is a work originally written in Hebrew, then translated into English and finally into Italian… How did you structure the translation and / or adaptation of the texts?

First I read the libretto aloud considering the lyrics as if they were spoken lines. Then I sang the score for a long time: I have to visually immerse myself in the written music and literally feel the syllables move through the muscles in my throat. Then of course I listened to the recordings of both the Hebrew and the English versions. I therefore had to develop a visual-kinesthetic-auditory approach of sorts.

Generally I always proceed in order from the first scene to the very last. My intention is to obsessively maintain the identical vowels of the original and all of the infinite internal and external rhymes. Obviously it is impossible, but with a softer attitude I would give up too soon, without trying to find solutions as close as possible to the intentions of the authors I translate.

The main problem is not to add syllables to melodies, even if Italian words always happen to be longer than the English ones and are almost never truncated. Then I try desperately to be as inventive as possible with rhymes and alliterations all the while adhering to the specific language of each individual character, looking for homogeneity between spoken and sung words. Finally I try to mediate between the musicality and comprehensibility of the Italian verse and the specific information of the original verse… In short: it is hard work!

Regarding the Orchestration written by Mátti Kovler, has it remained the same or has it undergone any changes? What ensemble is it written for?

For the Italian debut the orchestration of the CD for symphony orchestra was reduced to a (large) chamber ensemble and was performed by Dedalo Ensemble that specializes in contemporary music, directed by the excellent Marco Alibrando. The percussion and the piano had to sweat a lot!

The cover of the Italian version of the album by Ami and Tami, or Hansel and Gretel

Where did the first Italian performance of Ami and Tami take place and who participated in it? And of course, we know that just a few days ago the Italian album was released!

The premiere of Ami and Tami took place in December 2019 in a fully immersive setting that included the stage, stalls and boxes of the Coccia Theater in Novara directed by Marco Iacomelli and associate directors Costanza Filaroni and Massimiliano Perticari. In the main roles were Enea Lorenzoni (Ami) , Marta Noè (Tami), Giulia Diomede (Mother / Witch), Stefano Colli (Father / Ogre), Leonardo Pesucci (Imf) and Silvana Isolani (Grandmother). There was also the Choir of White Voices of the Coccia Theater, directed by Paolo Beretta eAlberto Veggiotti , and some graduates and student actors and directors of the School of Musical Theater . The sound design and CD recording of this cast were handled by the magician Donato Pepe.

Why do you think there is no knowledge of the "cultured musical" in Italy? When it comes to musicals, Grease or Cats come to mind , but not Leonard Bernstein's West Side Story , for example...

In my opinion it is an all-Italian prejudice towards that repertoire. The operatic circuit—which could have offered the right context in orchestral and production terms - is disinterested in it, partly due to the costs of the rights, partly for fear of being "invaded" by a new repertoire that would have undermined the status quo, a little for the style of singing different from the expectations of the Opera aficionados. For me they are blatantly wrong: the experiments at the Comunale in Bologna with Sweeney Todd and Il Bacio della Donna Ragno, at the Carlo Felice in Genoa with West Side Story and at the Coccia in Novara with Rent and Oklahoma! were greeted with great enthusiasm by a new and much younger audience than the usual subscribers.

Andrea Ascari can you tell us something about your next artistic projects?

I cannot reveal the titles, but I am now starting to work on a recent Tony Awarded Musical (the Broadway Oscars) and an original all-Italian project. Even with Mátti there are some ideas floating in the air ...

Thank you, Andrea, for being our guest on the Blog Della Musica.

Thank you for hosting me. Good Musical Theater to all!

Listen to Ami and Tami on Spotify

Andrea Ascari graduated in piano with Maestro Franco Scala. He graduated in Musicology in Parma under the guidance of Claudio Gallico, then undertook his Master's degree in Bologna in Entertainment Management. He then graduated as a Musical Actor at the Bernstein School of Musical Theater and as a teacher of Iyengar Yoga. He made his debut in the theater with Sabina Guzzanti in Con Fervido Zelo (1991), made his debut in the Musical in Side By Side By Sondheim (directed by M. Farau, Cantiere d'Arte Montepulciano, 2000) and walked the stage up to Jackie O. (directed by D. Michieletto, Lugo Opera Festival 2008) and Sweeney Todd (directed by R. Cucchi, Teatro Comunale Bologna, 2009). He produced the Italian debut of Company by Stephen Sondheim (directed by M. Farau, Trieste, 2003). Andrea dedicates himself to the translation and Italian debut of musical theater masterpieces such as Company , A Little Night Music , Sweeney Todd , Merrily We Roll Along , Into The Woods , Sunday In The Park With George , Assassins di S. Sondheim, Nine and Grand Hotel by M. Yeston, The Secret Garden by Norman & Simon, Chess by Andersson & Ulvaeus (Abba), Urine Town by Hollmann & Kotis, Parade by JR Brown, The Wild Party by MJ LaChiusa,Next to Normal by Kitt & Yorkey, Rent by J. Larson, Oklahoma! by Rodgers & Hammerstein. He also adapted librettos and surtitles for Ragtime by Flaherty & Ahrens, Kiss of the Spiderwoman by Kander & Ebb, Spring Awakening by Sater & Sheik and Les Miserables by Boublil & Schönberg, Crazy For You by G. & I. Gershwin, West Side Story by Bernstein & Sondheim. For Oblivion he translated How to Succeed in Business Without Really Trying by F. Loesser. For Arturo Brachetti he translated and adapted the songs of Arpa di Sera, Bel Canto (Si Spera!) and Great Variety Brachetti . He teaches at the School of Musical Theater at the Arcimboldi Theater in Milan and Iyengar Yoga at the Iyengar Yoga Institute in Milan.

Ami & Tami symphonic album is out.

Interview with Andrea Ascari, the author of the Italian libretto of Ami e Tami published

Ami & Tami symphonic album is out. 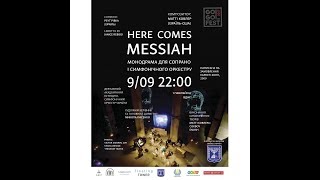